A new plan for Francis Parker

School gets added amenities despite complaints over new traffic light

On July 28, the San Diego Planning Commission voted unanimously to update the Master Plan for Francis Parker School’s Linda Vista campus, despite a contingent of neighbors against the proposed changes to traffic circulation in the new plan.

“[The update] will be used as the ‘blueprint’ for construction for up to the next couple of decades or more,” said Francis Parker communications director Grace Sevilla. “In the short term, we are hoping to make some improvements to the heart of campus.” 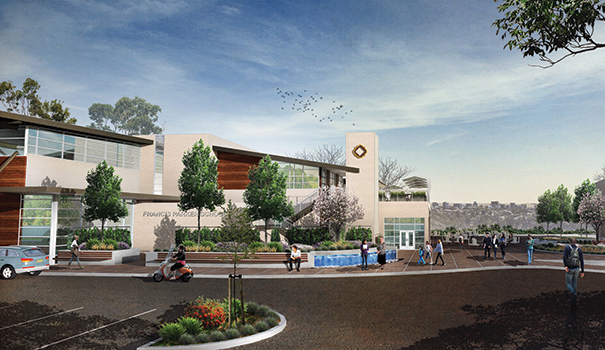 The planned improvements include a two-story Student Life Center with dining and meeting spaces, and a two-level underground parking garage below that building. The rest of the immediate improvements are to common gathering areas, such as a central plaza, renovation of the exterior of the Amelita Galli-Curci Performing Arts Center, and a new pedestrian entrance to the campus that will provide a view into Mission Valley.

Additionally, there will be added sports facilities including a new sports deck, an aquatic center and a reorientation of the field to include a track.

The construction projects, estimated to cost around $18 million, will add over 100,000 square feet in new buildings and redesigns of existing ones, allowing the school to enroll 940 more students.

“We are in an enviable position where demand for a Francis Parker education continues to grow and we want to afford the opportunity to have as many kids as possible have that education,” said Francis Parker head of school Kevin Yaley.

“Francis Parker wants to add hundreds more vehicles onto North Rim Court — our only lifeline to the outside community,” said North Rim Homeowners Association president Benjamin Davis. “Even worse, these extra vehicles will clog North Rim Court at the very time our residents are heading out to work.”

Also, Davis said, the new school exit will take away existing curb parking that is being used by residents on North Rim Court.

“The [members of the homeowners’ association] are not against the Francis Parker School,” attorney Craig Sherman said. “It’s just the thrusting of impacts onto North Rim Court and their community — expansion of lights and fields along the eastern edge; creating a circulation plan that goes through North Rim Court. It doesn’t have to be that way. It can be kept on Linda Vista. Other alternatives should be looked at. And the community plan provides that impacts to the residential community should be minimalized, and this isn’t doing that. It’s thrusting the traffic problems and needs of Francis Parker to this street.”

Susan Davey, a Francis Parker parent and member of the school’s board of trustees, sees the new plan as an improvement to existing traffic problems associated with the school.

“One of the most stressful parts of my day is negotiating the morning traffic on the busy Linda Vista Road,” she said. “All of our proposed changes from traffic improvements to the increased availability to on-campus parking will significantly benefit not only those related to Francis Parker School but also the surrounding neighborhood and greater Linda Vista community.”

Carolyn Wall, also a mother of a Francis Parker student, said the project’s added parking will keep students safer because they will no longer have to park in off-campus neighborhoods and cross busy streets without a signal to get to nighttime campus events, like football games.

The Planning Commission discussed the proposal and despite the objections of the North Rim residents, voted unanimously to approve the changes to the Master Plan.

“I don’t think that the homeowner association has an exclusive right to North Rim Court … the Francis Parker School has just as much right,” said Planning Commissioner Anthony Wagner.

The Planning Commission did add a caveat to the plan, which would make Francis Parker School create a program to encourage ride sharing among its students, many of which live outside of Linda Vista.

As of now, there is no target start date for the campus construction or the new traffic signal on Linda Vista Avenue, because the school is still in the design and permit process for the projects, Sevilla said.

“However, we anticipate breaking ground before the end of the calendar year.”